The main issues of domestic and external policy development of the state for the year 2004.

Nursultan Nazarbayev announced that the achievements in the economy and state-building make possible to concentrate on issues of further liberalization of the political system. The process of establishing a democratic type of a political culture in the society is a new reality.

According to President Nursultan Nazarbayev, the program of political reforms should include five key parts.

1. Modernization of the state governing system includes decentralization and delimitation of responsibilities between the central, regional and local levels of state governing authorities, improvement of inter-budget relations system, introduction of more wide practice of election of the local executive authorities.

2. Development of election system that is an adoption of a new legislation on elections and introduction of new electoral procedures in order to provide transparency, openness and competition of the electoral process.

3. Strengthening civil society institutions and, in particular, political parties and non-governmental organizations. It is supposed that political parties will gain an excusive right to nominate candidates to the Parliament. The practice of self-nomination will be also maintained. As for NGOs, they will receive state assistance through the system of state social order.

5. Improvement of law-enforcement and judicial functions directed towards protection of rights and freedoms of citizens, humanization of the criminal law. In particular, it includes an introduction of capital punishment moratorium, the institute of jurors and an arrest only by court order.

It is remarkable that once more the Head of Kazakhstan proclaimed the strategic way of political liberalization, in spite of significant tension in the region of Central Asia and the growing threat of international extremism and terrorism. Such policy differentiates Kazakhstan from some other countries of the region, in which slowing down and holding up democratic reforms was took up on the pretext of fight against terrorism.

The President of Kazakhstan devoted a significant part of his Address to the Nation to tasks in economic and social fields.

The good news for 15 million Kazakhstan citizens was an unprecedented increase in pensions, wages and social payments. The Government will assign additionally about 120 billion Tenge (0.8 billion U.S. Dollars) for social welfare programs for the next year and a half.

20-per cent average pension increase, 32-per cent minimal wage increase and 50-per cent increase of wage of state servants were announced. A tax-free minimum for calculation of individual income tax is planned to be increased simultaneously not less than on 30 per cent.

"At the most difficult times, I was always convincing people that a time would come, and a living standards would steadily increase. Today I can say with all responsibility that I am fulfilling the promised", said Nursultan Nazarbayev.

The 4-year impressive economic growth in Kazakhstan allows the Government not only to intensify social programs but also, for the first time, to put long-term and ambitious goals towards economic modernization.

Kazakhstan plans to decrease its dependence on exports of oil and other raw materials and to make a push in industrial and innovative economy development. There was a Program of Industrial and Innovative Development until the year 2015 elaborated. The main goal of the Program is a 3.5-fold increase of the volume of Growth Domestic Product (GDP) of the country in comparance to the year 2000. The Program includes reduction of energy-intensity of GDP in two times and three-fold increase in labor productivity.

The Program requires huge financing. Therefore, a system of development institutions is planned to be established and capitalized. In addition to the National Fund that performs saving and stabilization functions, there are charted to establish the Kazakhstan Investment Fund to make portfolio investments into the companies producing high value-added products and the Innovation Fund to support innovations and work with venture capital.

Besides, plans to increase financial capital of the Kazakhstan Development Bank and to establish the Export Insurance Corporation were announced. All these state institutions aimed to become a driving force of the competitive economy, draw private enterprises into innovative activities on the principle of partnership between the state and private businesses.

Starting the year 2003, the three-year Program of Agricultural Revival and Development in Kazakhstan will be implemented. The Government will allocate 150 billion Tenge (1 billion U.S. Dollars) to the Program. The Head of state reported that in addition to it the Rural Areas Development Program would be adopted. According to President Nursultan Nazarbayev, the increased state support of rural economy and an introduction of the right of private property on land will stimulate the rise of the share of agrarian sector in the economy and solve social problems in rural areas of the country.

In foreign policy, President Nursultan Nazarbayev concentrated on the issues of establishing security institutions in Asia and on regional integration of Kazakhstan, Russia, Ukraine, and Belarus. On his words, Kazakhstan will be a consistent supporter of the idea of integration.

Addressing to the Nation, Nursultan Nazarbayev accentuated the necessity to keep and develop cultural and historic heritage, and proposed a special middle-term Cultural Heritage Program.

The program is aimed to establishment of an integrated system of research of a massive cultural heritage of the people, reestablishment of historical, cultural and architectural monuments, generalization of the ancient experience of national literature and literary texts, creation a proper humanitarian education in Kazakh language which is based on the world achievements in science, culture and literature.

"At present, unlike the previous years, we have the necessary financial resources. The activities of all the branches of power must be coordinated, efficient laws must be introduced and implemented", - said President Nursultan Nazarbayev. 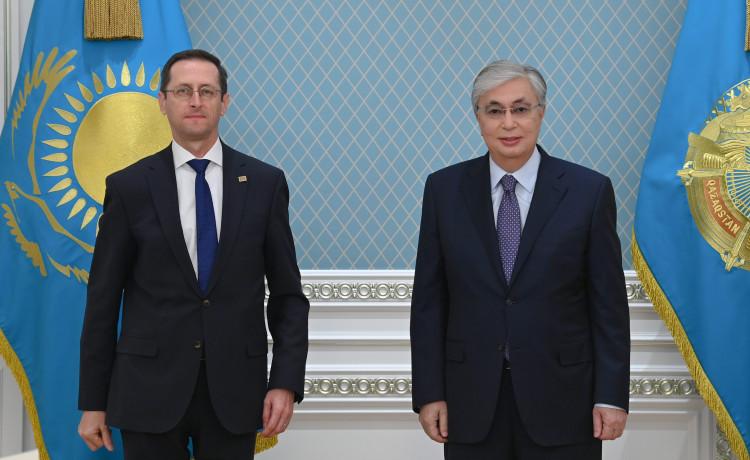